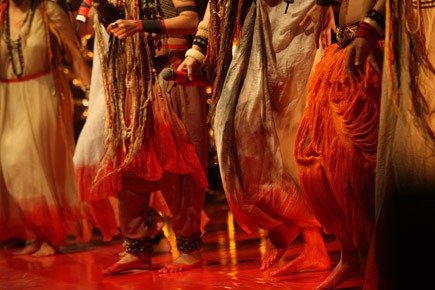 Mawaca is reference in the world music scene in Brazil and has participated in festivals in Europe and Latin America. You can find some important dates and events in the history of Mawaca below:

1998: In May of this year, Mawaca recorded its first work, ‘CD-Plus Mawaca‘ at Itau Cultural Institute in Sao Paulo

1999: They participated in the concert of the Japanese band Rinken Band, from Okinawa, invited by the Japan Foundation. Throughout 1999, Mawaca also opened shows for Brazilian artists such as Gilberto Gil, Rita Lee, Ed Motta, Caetano Veloso and Portuguese Dulce Pontes

2000: They performed at the Tenda Raízes in Rock in Rio In this year, Mawaca also participated in the opening ceremony of the event Amazônia.br alongside singers Marlui Miranda and Tetê Espíndola. In this year, the group released the CD astrolabiotucupira.com.brasil, at Sesc Pompéia, in Sao Paulo

2001: They have performed at the Municipal Theater of Sao Paulo with the Portuguese singer Né Ladeiras and Orchestra. On that same year, the group was present in the project dedicated to Lusiads by Camoes and did a concert with the symphonies Sinfonia Cultura and Jovem de Guarulhos

2002: They have performed the group’s first international tour in Spain, in cities like Madrid, Santiago de Compostela and Jaén

2003: The group was selected to represent Brazil at WOMEX, fair dedicated to world music that happened in Seville, Spain. On that same year, the group entered in studio to record the CD Mawaca Pra Todo Canto

2004: They shared the stage with Ceguinhas de Campina Grande at CCBB in Rio de Janeiro and Brasilia, and at Recbeat in Recife. In June, Mawaca released the CD Mawaca Pra Todo Canto, in the theater Crowne Plaza, in Sao Paulo

2005: Celebration of 10 years of career with the release of a box containing 5 CDs and a booklet with the history of the group. In the same year, Mawaca recorded their first DVD to be released on the next year

2007: Mawaca was selected by the Ministry of Culture to perform in Berlin, Germany, on the Popkomm Festival with the concert Rupestres Sonoros

2008: Release of the CD Rupestres Sonoros. This year, Mawaca performed in Bolivia, in cities like Santa Cruz de la Sierra and Sucre

2009: Mawaca entered the TOP TEN of the Europe’s World Music Charts. This year, the group gave different concerts in Sao Paulo and in the country side with Rupestres Sonoros, Inquilinos do Mundo, De Todos os Cantos do Mundo, and the project Contação de Histórias, at Sesc Santo André

2010: Travel to China, where the group met an impressive schedule of 24 performances in just one month, at Expo Shanghai. They also gave concerts in Portugal, during the VII Meeting of Cultures in Serpa, and in Santa Cruz de la Sierra, Bolivia. On that same year, the group celebrated 15 years and and in June released the DVD Rupestres Sonoros at Auditorio Ibirapuera in Sao Paulo

2011: Mawaca returned to China, in the historic city of Hangzhou, for performing on the stage of the Leisure World Fair. In May, the group participated in the project Navegar é Preciso, literary cruise by Rio Negro, organized by Livraria da Vila and with the participation of writers like Laurentino Gomes, Cristovão Tezza, Ilan Brenman, Mary del Priore and José Eduardo Agualusa. The following month, the group recorded their third DVD, Ikebanas Musicais, recorded at Sesc Pinheiros, in Sao Paulo

2012: They have participated in the ISME (International Congress of Music Education), in Thessaloniki, Greece. In this year, Mawaca finished the group’s new DVD, ‘Ikebanas Musicais’, with Japanese repertoire and Brazilian elements that will be released in November. In August, they recorded their fourth DVD, ‘Inquilinos do Mundo’, which will be released in 2013