More about Cantos da Floresta tour in the Amazon

In 2011, Mawaca did a tour to Amazon and interchange musical experiences with six different indigenous groups like Kaxinawa, Ikolen-Gavião, Paiter Surui, Karitiana, Kambeba and Comunidade Bayaroá. There, they went to the villages and did musical workshops. Next day, they performed together in theatres in six different cities like Porto Velho, Cacoal, Ji-Parana, Manacapuru and Rio Branco and Manaus. They performed at the anthological Theatro Amazonas. It was the first time that indigenous group performed in that theatre. The tour was registered in a documentary Songs of the Forest that was selected by Womex Exhibition in Thessaloniki in 2012.

You can read the diary of the tour (In Portuguese) at here and listen to the songs at Radio UOL. 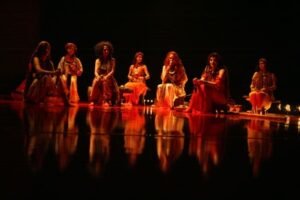