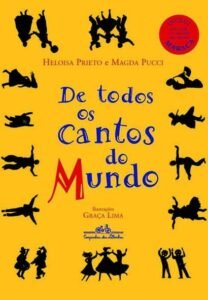 Mawaca songs became theme of the book De Todos Os Cantos Do Mundo that means From all corners of the world published by Companhia das Letrinhas, one of the most important editors in Brazil. With texts by Heloisa Prieto and Magda Pucci, the book presents the stories of the songs Mawaca has being played during its long career.

Seeing a growing interest of the children’s repertoire Mawaca, Heloisa and Magda decided to develop this specific project for which they may now become involved in the cultures of various countries such as Ireland, Japan, Mexico, France, Portugal, Bulgaria, Brazil and Israel through most beloved songs of the group.

Find out where to buy it!