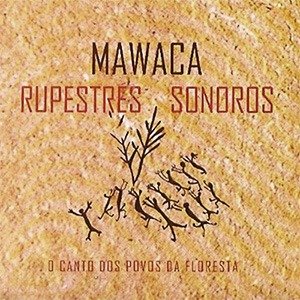 The newest Mawaca CD Rupestres Sonoros is a tribute to the peoples from the Amazon forest. It presents new arrangements and versions of songs from the Suruí from Rondônia, the Kayapó from Xingu, the Pakaa Nova from Guaporé, the Kaxinawá from Acre, among others. It is possible to listen to the sounds of an inner Brazil that is bigger than one can imagine, for the indigenous musical diversity is broad and extremely rich although mostly unknown even by the Brazilian audience. Magda Pucci, Mawaca´s musical director – has been searching for, (and discovering), connections between the rupestrian art and the indigenous symbolic and artistic universe.

In this project, Mawaca involves a musical archeology and ancestral imagery, realizing that the prehistoric Brazilian man was an Indian who danced, practiced rituals, celebrated, hunted, drank chicha, loved, painted himself with urucum, reported himself to the spirits of the sky, the air and the earth, and also adorned himself with necklaces and head ornaments. Images that were painted on the rocks of Serra da Capivara in Piauí and in Monte Alegre in Pará convey these scenes with many different rituals whereby we can imagine how life was over 12,000 years ago.

During the past three years, Mawaca went through several periods of exploration and evolution. Over this time the research, the experience gained in concerts, the investment in other languages and the connections established to other fields - such as linguistics, Ethnopoetic, Archeology, Mythology and Neuroscience - have contributed to develop the songs and ideas presented in this work.

Magda Pucci comments on the motivations which led her to produce this project: “There are more than 200 indigenous groups here in Brazil, and we don't even know their names, or the fact that they speak about 180 different languages! That's why I was looking forward to showing their songs and also composing some themes to explore the abundant sonority of the languages spoken in Guaporé and in Xingu. Their names, spoken in a direct sequence, are enough to guarantee a very interesting rhythmic music”.

The CD Rupestres Sonoros features as special guests the singers Marlui Miranda and Tetê Espíndola, the multi-instrumentalist Carlinhos Antunes and the producer, keyboardist and flutist Xuxa Levy, who co-produced the CD with Magda Pucci and Paulo Bira, the contrabass player of the band.

Xuxa Levy applied several technological resources in the CD production, using delays, phasers, modulators, octave devices and all sorts of reverberations, giving a new dimension on how Mawaca sounds and creating astonishing results. “It was necessary to transform this music, because the original time of the songs is different, decelerated. It is obvious that we mixed it to other elements to make the chants become closer to the contemporary world, much more comprehensible to our 'accelerated' ears, asserts Xuxa Levy.

The theme MAWACA opens the CD, a song written especially for the band by the French composer Philippe Kadosch, who creates an imaginary language from the sounds of several languages which are almost extinct. This song shows Mawaca's investment in the past and future, it's combination of cultures, and it's strength: singing the most diverse languages of the world while exploring all possible sonorities.