This record in images of the Rupestres Sonoros CD, 2005. It was recorded at Auditório Ibirapuera in 2008, this DVD was released on December 2009 at SESC Vila Mariana Theater, in São Paulo.

Rupestres Sonoros is a Mawaca’s tribute to the Indians from Brazil, which music diversity is still not well known by Brazilian audiance. The group has embarked on a “music archeology” from brazilian cave paintings, understanding that prehistoric man form here is the Indians that dance, performe rituals, have parties, hunt, drink chicha, to have a date, paint their bodies with annatto, use necklaces and war bonnet, and that report to beings from heaven, air and earth.

Here there are some impressions on the beaty and diversity of those precious rocks from indigenous sound world. This work has images created by Panais Bouki, customes by Jéssica Vidal, scenario by Silvana Marcondes and special participation of an ex-singer of the group, Fabiana Lian.

Marlui Miranda, expertise in research Brazilian indigenous music, has participated in the CD recording and make a statement about this Mawaca’s work on a world scenerio. 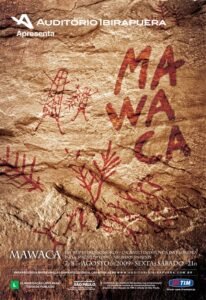 “MAWACA’s work, conducted by Magda Pucci, comes once again to enhance their presence in the music scene in Brazil with their remarkable vocal interpretation, including Brazilian indigenous issues in their diverse repertoire.

It is an initiative that consolidates the trajectory of a group dedicated to studying and presenting to the public in Brazil and abroad “root” songs from several cultures in the world, with great mastery.

In recent years, the music of Indigenous peoples have achieved domestic and international audiences, a slow build from the work of artists and creators, allies of Indigenous peoples, supported by anthropologists and linguists. I have my share of contribution to this process and try to always participate and support initiatives that strengthen indigenous culture.

MAWACA presents striking voices and arrangements and records a repertoire that reflects much of Magda Pucci’s research on Surui Indians from Rondônia and her willingness to dive deeper into this musical hemisphere.

And we, with much happiness now, can check the result of the brilliant work Rupestres Sonoros, turning our eyes and ears to the pleasant task that is before us: unraveling the mysteries of this great and rich country that is Brazil, through the harmonious voices from MAWACA”

Find out where to buy it!